A Week On The Wrist: The Omega Speedmaster ‘First Omega In Space’

This week on my wrist is the Omega Speedmaster “First Omega In Space,” a watch inspired by a historically important model worn in space on October 3, 1962, by U.S. astronaut Walter Schirra – an event to which the new model owes its name. We raved about the FOIS when it was introduced in 2012. An affordable manually wound chronograph with great history, it seemed to hit a chord with both the nostalgic, and those new to the brand. It certainly looks the part, but how does it feel on the wrist? 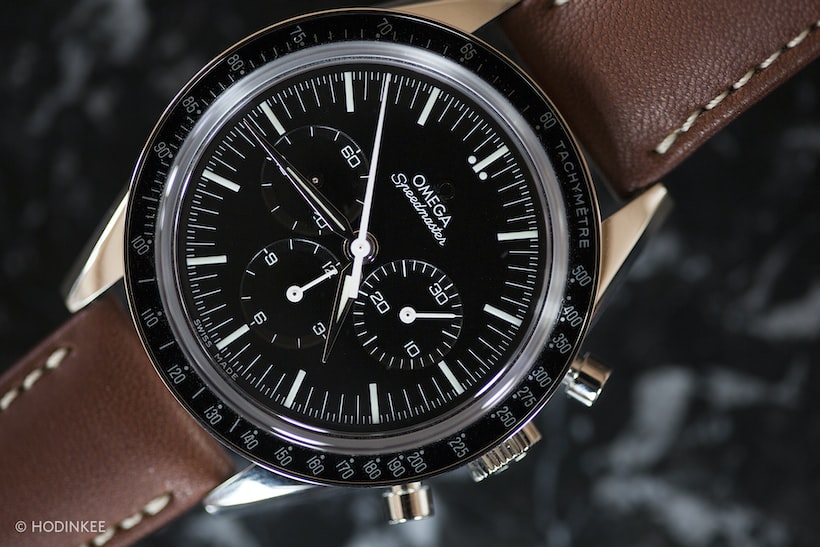 The story goes that Walter Schirra decided to go watch shopping in Houston, Texas, a few months before the Mercury-Atlas 8 mission, knowing he would become the fifth man to travel to space. Perhaps he wanted to mark the momentous occasion. That part remains legend, though, as a second-generation aviator and military pilot, Schirra would most probably have heard of OMEGA and its relatively new racing chronograph. The Speedmaster, with its black dial inspired by the dashboard of Italian sports cars, had a strong look that definitely seems to have caught Schirra’s eye, and he eventually set his sights on a reference CK2998 (the exact case reference remains a mystery, although -4 and -5 are the most likely bets).

The good news is that OMEGA have kept many of the features that make CK2998 one of the most collectible pre-moon Speedmasters, from the iconic 12-hour, three-register layout, to the elongated “Alpha” hands and black tachymeter scale on the bezel. Many of these aesthetic elements are back, albeit with some minor changes.

What makes the First Omega In Space such a distinctive Speedmaster is the symmetry of the design. The straight lugs and thin bevel between the top and the sides are directly inspired by CK2998, and were a common feature of early pre-moon Speedmasters, until Omega decided to adopt asymmetrical twisted lugs after 1964 (with the appearance of the Speedmaster Professional). Another feature brought back from the original CK2998 is the applied logo at 12 o’clock, which pops off the dial unlike the more commonly printed logo of post-1968 Speedmasters.

The stainless steel case measures 39.7 mm, which is 2-3 mm smaller than most of the Speedmaster watches currently in production, and the watch itself is very well proportioned. The watch, like most Speedmasters, is so comfortable it’s easy to forget you’re wearing it.

The lack of protection the tachymeter scale receives, means it is prone to scratches (as you can see in the vintage model above), while the box design of the sapphire crystal – say goodbye to hesalite – has the potential of catching edges at a bad angle. Wear it reasonably carefully, and none of these will be an issue of course.

Speedmasters were designed with the scale on the bezel to give the watch the intended sporty look OMEGA were after. The FOIS still retains a lot of the motorsports inspiration and look that characterized early Speedmasters. Add to that a brown leather strap and you feel like you’re in Monza, about to grab the wheel of 335 S Spider Scaglietti. This is a look should age very well as the leather of the new strap loses its shine with passing years.

As you’d expect, the First Omega In Space isn’t an exact replica of the watch Schirra bought more than half a century ago. That would’ve been wishful thinking on our part. According to OMEGA’s records, the watch Schirra wore in space had straight register hands, including the running seconds hand. For the FOIS, OMEGA decided to introduce a leaf-shaped seconds hand. It’s not historically correct, but I found the use of the leaf shape for all of the timekeeping functions (hour, minute and seconds hands), coupled with their stainless-steel composition is a very smart way to differentiate them from the white baton hands that are used solely for the purpose of the chronograph function.

One of the finer details overlooked by OMEGA however is the placement of the “dot” next to, and not above the 90 mark on the tachymeter scale – a detail that sounds insignificant but would have brought a lot of pleasure to the purists, of which there are so many.

There are also inevitable question marks about the movement which powers the First Omega in Space. Schirra’s CK2998 was powered by the famous Omega caliber 321, one of the finest and most collectible movements ever made. However, the Lemania-based column-wheel chronograph movement had a relatively short production run, and was soon replaced by ones that were easier and less expensive to produce in large quantities. The First Omega In Space carries such a movement, caliber 1861, which is the latest evolution of caliber 321.

Creating a link with all modern Speedmaster Professional watches, this movement may not have the cachet with collectors of the 321, but it’s a proven movement in its own right. It’s worth a good look (which the FOIS does not offer, as it has a solid caseback) but fear not, we recently filmed it during a servicing of an vintage Speedmaster at Manfredi Jewels in Greenwich, CT.

What the First Omega In Space does do is give you the chance to discover this great movement in a Speedmaster sans crown guards. Personally, I find it adds to the enjoyment of winding the watch, and you’ll be doing that every day as the power reserve is only 48 hours. But would you complain about having to refuel a great vintage automobile every time you take it out for a spin? It’s definitely part of the experience you’re paying for.

The case back is probably where the re-edition differs most noticeablys from the original. A portal into the past of the watch, it pays homage to Schirra’s own. It features a screw-down case back embossed with the words “First Omega In Space,” the date of Schirra’s space flight, and the original 1962 execution of the OMEGA Hippocampus.

Whether or not OMEGA could have made a watch more in the image of Schirra’s CK2998 matters little in the end. The changes introduced are few and far in between, noticeable only to experts, and they do not make the FOIS any less enjoyable to wear on a daily basis. The “First Omega In Space” looks like a vintage Speedmaster, and feels like one too. While it falls just a tiny bit short of complete historical fidelity to CK2998, it doescaptures the magic of this historical timepiece. If the Speedmaster was originally designed to stand apart from other chronographs, the First Omega In Space fits the bill. A numbered edition, the OMEGA Speedmaster “First Omega In Space” is available at $5,300 and comes on a brown leather strap. Bracelets can be added for a premium.

Don’t have the HODINKEE App yet? Get years of amazing watch content plus new stories, breaking news, and access to great new features like HODINKEE Live, free on iOS.