A Week On The Wrist: The Zenith El Primero Reference A3817

If you have been following HODINKEE, you might agree with us that Zenith is a manufacturer that produces some of the more value-for-money watches these days. There are few totally in-house chronograph movements that can be had for just around $10,000, and which come in such a variety of dial and case designs ranging from sporty, to totally classic, to something in-between. Most modern watch collectors would probably also recognize the distinctive tri-color dial, especially with the recent lineup of watches such as the Zenith El Primero 36,000 VPH or El Primero Original 1969. And as most of you might know, the tri-colored dial originates from the Zenith El Primero ref A386, a watch produced in 1969 with the (arguably) first high-beat automatic chronograph. 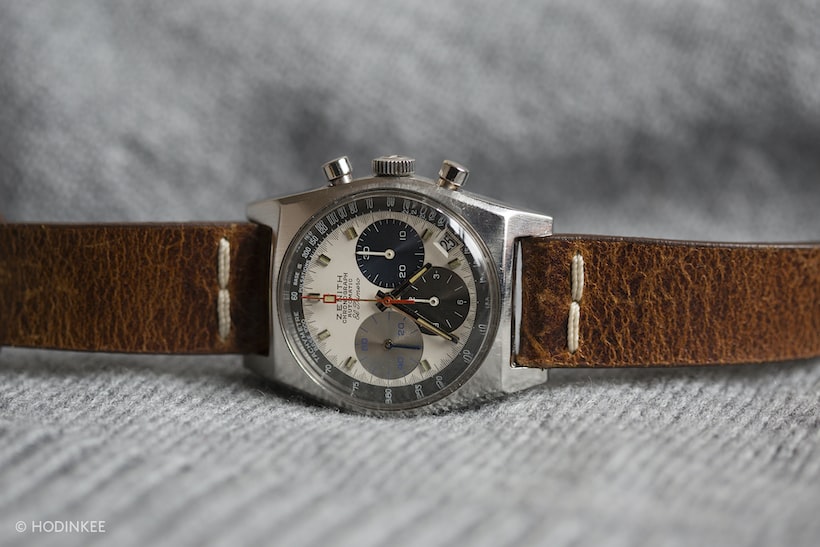 But did you know that the reference A386 was not the only watch in the El-Primero family with the tri-color dial? There was one other, less well known cousin to the ref A386, which has a more interestingly designed tri-colored dial: the El Primero reference A3817.

While I’ve owned a few vintage Zenith pieces, I’ve personally never had much wrist time with an El Primero (even though I have previously owned one – more on that later). That changed recently when I got to spend about two weeks with this particular watch.

In a sentence, I think it’s pretty awesome.

If you remember our article from a while back on the Heuer Monaco, you’ll recall we dug deep into the history of the Heuer Caliber 11 and told you why there are different opinions on who actually produced the first self-winding chronograph. While Zenith may have first announced the movement and a few prototypes in January of 1969, Heuer is arguably the first to make it to global production in August of 1969. And in the midst of all of that, Seiko is said to have released their version of the automatic chronograph as early as May 1969, but only for the Japanese market. The history and discussions are well documented, and you can see a good in-depth article called Project 99 by Jeff Stein here.

But there is little question that Zenith’s El-Primero 3019PHC movement could be considered the most technically advanced of the three. It was a completely integrated movement, as compared to the Caliber 11, which consisted of a Dubois-Depraz chronograph module mated with a base movement from Buren. It also featured a seconds, hour, and minute counter and the date function, as compared to the Seiko 6139, which had neither an hour nor continuous seconds counter (though it did possess the day function – and let’s not forget that the 6139 was also the first automatic chronograph with vertical clutch). Back in the day, the El Primero also was a movement used by many other manufacturers, including Rolex and Movado. And it is a movement still used today in many of Zenith’s watches, with only a few modifications since 1969 (Caliber 11, and the 6139 are both long gone). All in all, this is pretty impressive movement, to say the least.

A Week On The Wrist

Now that we’ve covered a bit of history on the movement, how does the watch wear on the wrist?

Before everything else, this is a sizeable watch. While not on the level of modern Zeniths, the A3817 measures 37 mm excluding the crown but is 47 mm from lug to lug because of the design of the case. It is slightly smaller in width than the ref A386, which measures 38 mm excluding the crown, but having worn both I feel the A3817 actually feels more substantial on the wrist. This is a watch that is sizeable, especially by vintage standards, yet it sits very well on the wrist and fits under the cuff with no issues at all. That is because of the 6.6 mm height of the movement; in comparison, the Caliber 11 movement is ~7.7 mm tall.

The case itself takes elements from both the ref A386 and ref A78x family. It is still somewhat tonneau shaped, but is a lot more angular than the ref A78x (the A3817 actually has visible lugs, for instance). The edges on the case are distinct and sharp, similar to the ref A386. The surface of the steel case also has a brushed finish, which lends it an interesting look.

The case design was an unexpected, but pleasant surprise. It departs from a ‘typical’ case design (such as in the A386), which usually has a circular and symmetric center that envelops the dial. At the same time, it is not too funky, in comparison to the case design of the ref A781/2/3 family. I used to own a ref A783 – now that was a chunky watch. It felt like I was wearing a block of metal on my wrist, and as a result that watch never really got much wrist time despite the amazing El Primero movement that beat inside. The ref A3817 is a nice balance between the two: innovative, different, but still sleek; retaining a classic elegance with a dash of eccentricity.

And of course, like the A386, the A3817 has the distinctive tri-color dial. But the A3817 gets more creative with a very unique blue sub-seconds hand on the 9 o’clock sub-dial, which is also painted with blue indices. The A386, in comparison, has all sub-dials painted with white indices with uniformly white hands.

As a note, these watches typically came with a hand in a lighter shade of blue than the example in this article (see the picture above on the left). Initially I thought the sub-seconds hand on my watch might have been a replacement, but after searching around I’ve come across quite a few watches with the same dark-blue hands. The darker hand is also slightly thinner, and some of the examples I’ve seen with the darker hand have the set of all three sub-dial hands just slightly thinner than its counterparts with the lighter blue hand – which again might suggest that the hands are not individually replaced, but rather come as a set.

The watch further features a red paddle hand, which can be found in many of the El Primero chronographs made by Zenith in this era. Of note is the white dial surrounded by a grey ring, which displays both a tachymeter and a Base 15 pulsations scale – which are seen also on some other references, such as the ref A3818 and A788.

The indices also have an interesting pyramidal shape, which I believe is only limited to the A3817 and A3818 in the family of El Primero chronographs (though there are a few non-chronograph Zenith watches which have it, such as the Autosport Luxe). At every 5 minute mark is an applied metal marker with a stripe of lume down the middle, something we see in other El Primero references as well.

Note that this reference should come with a signed crown and case back.

The “SP 1301” engraved on the inside of the case back is a reference to the type of the case (produced by Spillman – hence SP). There are a few variations (SP 1205 and SP 1301-1, for instance) for different models in the El Primero family.

Again, recall that this movement beat at 5hz (36,000 beats per hour), which means that it could have a measurement accurate to one-tenth of a second. This is in comparison to most chronographs of that era, which beat at 2.5hz and could only measure to one-fifth of a second. The video below (in slow motion) compares the El Primero 3019PHC with a Gallet Multichron powered by the Valjoux 72. Notice that the El Primero beats exactly twice as fast as the Valjoux 72.

The date window is at roughly 4-5 o’clock. The date, in this movement, switches instantaneously, and if you blink you just might miss it.  (Hint: it takes place just before the sub-seconds hand reaches the 5 second mark.)

This watch would have originally come on a Zenith ladder bracelet (with either ZK or ZKM endlinks). I recently had the chance to purchase one from a friend and he was gracious enough to let me try it on. In comparison, I have to say the strap felt a lot more comfortable. While wearing the A3817 on a bracelet is probably the “original” way to wear the watch, I honestly preferred the leather strap just from a comfort perspective (and I thought the bracelet looked a bit fragile to be honest). I decided to stay with the leather strap.

The ref A3817 was roughly 30 seconds fast after a week on the wrist – which is not bad at all for a vintage watch. Remember, the El Primero beats twice as fast as most other vintage watches (18,000 vph vs. 36,000 vph) and thus should, all other things being equal, offer better rate stability. A slower beat classic chronograph movement like a Valjoux 72 should theoretically not perform as well as a faster beat movement, but in practice whether that’s true will probably depend more on how recently, and just as importantly, how well, the watch was serviced, adjusted and regulated.

One important thing for collectors to note: these cases frequently come very heavily polished. The example that is shown here has likely been polished once, but fortunately still retains most all of the characteristics of the original case. One thing to look out for is some amount of clearance between the upper and lower edges of the crystal and the straight edges of the case. Watches that have the edge of the case immediately meeting the lower or upper edges of the crystal are likely to be heavily polished, regardless of finish or sharpness of the lines.

The paint is also notoriously flaky on the hands – notice the same flakiness on the watch presented. Finally, the lume on the paddle hand also seems to fall off surprisingly often – again something to watch out for.

About 1,000 pieces of the ref A3817 were produced, in comparison to around 2,500 pieces for the ref A386, which makes the A3817 significantly rarer. While prices for Zenith ref A386s have been climbing significantly over the past few years, and you probably wouldn’t be able to find a good example for anything less than $10,000, the A3817 can typically be found at some discount. A decent example might be found for less than $8,000, perhaps adding on $500 to $1,000 for examples with a bracelet. For instance, we contacted the seller of this example in pretty decent condition (except for the sweep seconds hand) and learned that it sold for around $8,500. That said, prices seem to be steadily catching up to the ref A386, so we suggest getting one soon if you can.

Overall the Zenith El Primero reference A3817 was a pleasant surprise, and a very fun watch to wear. It definitely added some color to my outfit, especially since most of the vintage watches I own have at most two-tone dials. The tri-colored dial of this particular reference adds a casual and fun feel, and is balanced nicely by the larger case. I honestly didn’t expect the angular tonneau-shaped case to grow on me, but it did. The watch is both elegant and quirky, and you see that design philosophy embedded in both the dial and case.

For me personally, the final verdict isn’t out yet. I’ll know in about a month when I arrive in Paris (where my girlfriend currently is). Stay tuned.

Don’t have the HODINKEE App yet? Get years of amazing watch content plus new stories, breaking news, and access to great new features like HODINKEE Live, free on iOS.